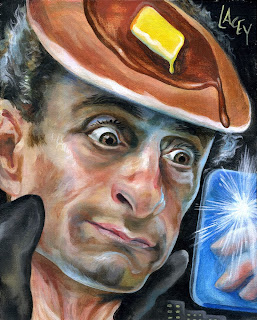 Posted by Unknown at 4:29 AM No comments:

Geraldo Rivera, who spends much of his time nude around the house when he isn't tweeting selfies, has been kind enough to send me a number of other untweeted casual photos of himself from which he would like me to create paintings (the 'photo' thing is over he tells me and he would prefer artistic depictions from this point out). Geraldo would like to assure his fan base that he doesn't spend all of him time taking cellphone pics in front of the bathroom mirror-

The above painting is of Geraldo having remote control problems. He knows that one of the controls is for the television but is beside himself trying to figure out which one. Boy, do I know what that's like.  Good luck with that!

I'm currently considering a number of other intriguing Geraldo pics for the next painting in the series. I prefer one of Mr. G. searching for change under the cushion of an arm chair and he discovers an old Coca-Cola bottle instead. Another for his collection!

This is an 8 by 10 inch acrylic painting on a sheet of canvas. It is mailed securely in a hand crafted foamboard mailer. Shipping is at cost.

A second painting of Fox News personality Geraldo Rivera naked and hanging around the house, this time lounging with his cat Florence-

Posted by Unknown at 6:16 AM No comments:

This is about the only part of this painting that I can post. You can view the full art however at the link below.

I'm certain Trey will enjoy this painting as in the style of Jay-Z's new album Magna Carta Holy Grail it incorporates two seemingly conflicting societal references, in this case Blackface and Pancakes, which here diverge into the act of Mapleface.

This is an 8 by 10 inch acrylic painting on a sheet of canvas. The painting is well packaged in a handmade mailing envelope, and shipping is at cost.

Posted by Unknown at 5:16 AM No comments:

Soon to be a future episode of Morgan Freeman journeying through a wormhole, or an infinity mirrored bathroom.

Painted from a series of reference photos, a similar one of which I posted recently to my Flickr stream.

Male Nude Artist In Chair Painting
Posted by Unknown at 4:59 AM No comments:

This is an 8 by 10 acrylic painting on a sheet of canvas. You can frame it quite easily in any photo-ready frame; I recommend removing the glass and adding an additional sheet of backing cardboard to hold the painting in place.

I've added this and a few other recent feline flapjack portrayals to my ever expanding Art Gallery of Cats With Pancakes On Their Heads. I'm also planning on a new gallery featuring my expanding collection of paintings of ferrets with pancake on their heads.

A memorial portrait painting of Glee star Cory Monteith.  This painting was from a scene where Rachel Berry is singing to Finn Hudson in a classroom, but I can't remember the name of the song.

This is an 8 by 10 inch acrylic painting on a sheet of canvas. It is one-of-a-kind original, hand painted, and utilizes in part metallic and iridescent paint.

Posted by Unknown at 4:52 AM No comments:

I don't know what you are talking about Florida so here's a painting of George Zimmerman with a pancake on top of his head.

This is an 8 by 10 inch acrylic painting on a sheet of canvas.  It is painted in part with metallic and iridescent colors; the background looks grey in the scan but is actually black overpainted with silver iridescence. This imbues the painting with a pleasant, shimmering quality, an attribute which most people expect in their George Zimmerman pancake art.

Posted by Unknown at 3:59 AM No comments:

Posted by Unknown at 5:08 AM No comments:

Like the Eliot Spitzer painting posted immediately before, I had no idea what I was doing with this painting until the last moments.  In my better paintings, or at least the paintings that I like, I suppose there is a sort of symbolic visual language which is to various degrees obtuse.  The language for the most part comes out of the painting rather than being imposed upon it. The cauliflower ear compliments the broccoli pompadour-a wonder he can hear out of that thing.  The difference in color between the face and neck belie that this could be a mask.  The cream from the Twinkie could be smoke, which Obama no longer does-so perhaps this is a fuse. The shape surrenders meaning to visually compliment the stalk rather than enunciate a caricature.

A Painting Of Aaron Hernandez With A Tattooed Pancake On Top Of Head, Ebay Art Auction

Remember, all pancakes are innocent until proven delicious.

The uncensored art can be viewed here (NSFW).  In my opinion these paintings are rather tame; nothing is actually 'happening' and all you have are body parts, but there you are.

Nude #1 is sold but two and three are still available-

I harbor many deeply felt issues regarding pancakes and therefore if I can I like to take the opportunity to revise recent paintings, usually because I am in some way dissatisfied with the pancakes pictured therein. In this way I may revise myself. The process is constant.

Here are three recent paintings featuring two kitties and one President.  They all feature pancakes, and are all slightly more presentable now than they were before. Or, perhaps not.

Posted by Unknown at 2:28 AM No comments:

A very special painting for the Fourth of July featuring the great Ron Jeremy, also known as The Hedgehog, holding an actual hedgehog in his arms while a pancake boat shoots fireworks into the sky and a teary eyed President Barack Obama looks over his shoulder at the proceedings-

This painting also features a hidden dove.  Can you find it?