Here's a cartoon drawn by faithmouse fan ComicBaron which he posted a few days ago on his Comix Blog site. This is the first hand drawn cartoon he's posted online. I think he did a great job- 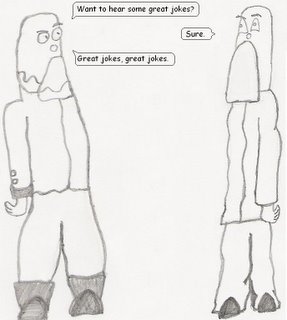 You may have noticed that I've removed many links and comments in order to live up to my new '100% Child Safe' banner posted on the top of this page. I've also pulled a number of my more provocative cartoons. For those disappointed in this change in direction, I apologize. I've decided, following my trip to Washington, that I have a responsibility not to link to material which isn't child friendly. Most of the links were to sites critical of the cartoon and which routinely employ adult language and pictures and/or are outright hostile to Christianity, and some were to faithmouse fans who's sites aren't necessarily geared towards children. I've removed these links so that younger people won't mistakenly come across material to which they really shouldn't be exposed. In my quest to create dialogue and to welcome those who might not agree with my point of view I've forgotten that it's the job of adults to protect children; as a card carrying adult I need to accept that responsibility and do a better job of it.
If you find any cartoons or links on this site which you feel aren't family friendly, please post a haloscan comment letting me know. Links to sites which discuss material harmful to children are acceptable (Renew America and Pro-Life Blogs, for example), but those actually using foul language and/or imagery aren't.
I'll have a new cartoon posted later today, which will be the second cartoon in the series which I started last week.

Thanks to Jewel for being the first to offer an encouraging word and for posting her recent cartoon. The lovely Aug has returned to Ireland and gave Chris a very nice compliment on her Realitycheck(dot)ie. Because I'm thick, I've just realized that i.e. stands for Ireland. Liberty Bell has posted the Neverborn 'what about MY rights?' toon. Faithmouse has been nominated in the January 2006 Best Humor Blog Category at Bloggin' Out Loud.

A new interactive gallery of faithmouse favorites has been compiled and posted. Enjoy!
Posted by Unknown at 3:57 AM